So, in case you hadn’t heard, the Olympics have started. The opening ceremony was last night, and, to my excitement, the ceremony featured famous characters from British Literature. I think this was a fantastic idea! Seeing Mary Poppins float down from the sky, and a giant sized Voldemort, and Peter Pan, and the Red Queen… 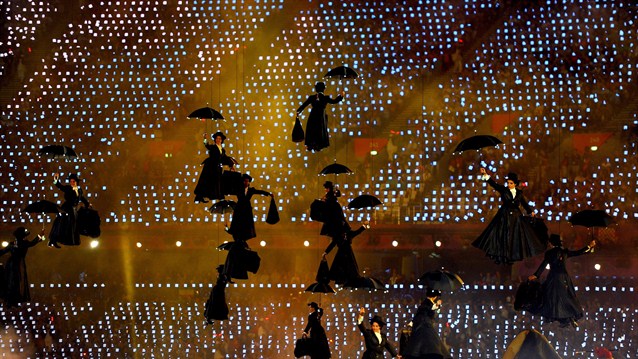 Mary Poppins arriving at the Olympic Stadium (from London2012.com)

The reason that I think it connected with me so much (other than the fact that, as you may have gathered, I rather like children’s books) is that books are one of the ways that we can really get a sense of a place. When we are children (or really, even when we are grown up), we can only really know what a place is like is through stories. We can see pictures, sure, but they can’t really evoke to us what it is like to be a person standing in the shoes of someone walking down a street in London – the smells, the noises, the characters you meet. Before I traveled to England, the England I knew was through books. Even books, like Alice in Wonderland, or Peter Pan, that are set in fantastical setting, lets the reader know what people in different places are like.

Reading enables us to discover new places, both real and imaginary. But they also make the real seem like magical places. Who didn’t want to visit Kensington Gardens are peek behind the bushes for fairies after reading Peter Pan? Or see if they couldn’t find Platform 9 and 3/4 at a London train station after reading Harry Potter?

I have never been to Diagon Alley, or fallen down a rabbit hole, or flown to Neverland. But somehow, after reading about them, I feel like  when next I visit London, I might be able to.