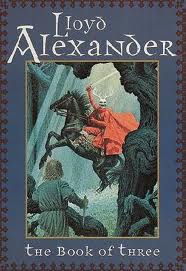 I think I have only read The Book of Three by Lloyd Alexander once before – I remember reading it and doing a book presentation on it when I was about twelve. The only other thing I really remember is that it involves a pig running away. So as part of my ‘re-reading’ spree, I decided to give it a re-reading.

While it is enjoyable, I am a bit surprised that this book made the list of 1001 Children’s Books You Must Read Before You Grow Up. Don’t get me wrong, it is a nice read, but it is a bit of a stereotype of an epic fantasy. There is an old enchanter, a good king, a evil king, a fearsome warrior, a princess, a strange, Gollum-like creature (but much more likeable than Gollum)and a bard. Good triumphs and evil is conquered. There isn’t much in this book that says to me ‘You Must Read Me – I am Unique’. It seems a bit of a stock-standard epic fantasy to me.

However, perhaps when the book was first published in 1964 the characters of the old enchanter, the good king, the evil king and so on weren’t so stereotypical. The Book of Three is the first book in a series of five, and in 1966 the second book received a Newbery Honor and the last book won the Newbery Medal in 1969. I haven’t read the other books in the series, so I can’t comment, but The Book of Three doesn’t seem to have anything in it that makes it unusually exciting.

I talked about this briefly when writing about Ash Road – that ideas that were once fresh, original or resonated with people can become overused or stale. The Book of Three doesn’t feel stale – it is still amusing, and quirky, and a good high adventure story – it just doesn’t read as a landmark book. But if anyone has read the other books in the series, I’d love to hear their opinion.